It’s Remembrance time. Red paper and enamel poppies are blooming on lapels all over the nation as people remember those who fought in conflict, and the huge sacrifices they made. Last night, the Festival of Remembrance at the Royal Albert Hall opened with a stunning rendition of “I vow to thee my country”. First, just three slow and quiet brass instruments; then violins joined in; then drums, voices, and finally the whole orchestra played, while flag- and oversized headwear-bearing members of the forces, marched into the hall in step with the music. We were only four minutes into the hundred-minute programme and the lump in my throat was already swollen and wobbling out of control. Gosh we do this so well.

I felt very differently two nights ago, however. I had just finished giving my unavoidably somber talk Counter memorials: Germany’s post WWII culture of apology and atonement, when an elderly audience member told the hall about FIFA’s recent decision to allow players to wear poppies (last year it had forbidden them). And, he continued, the German team had also agreed to wear them. All the players would wear black armbands sporting a red poppy for the England / Germany friendly match at Wembley, on the eve of Armistice Day. I honestly wanted to cry, right there and then. But I couldn’t tell if I was deeply moved, deeply angry or some uncomfortable combination of the two.

On the one hand, I felt awe at the magnanimity of the Germans, showing willingness to adopt the wholly British symbol, whose origin was about remembering – crudely put – all those killed by their forefathers in World War One. I know, I know, Remembrance today extends well beyond that, but nonetheless, the poppy is a singularly British image of our war dead, a huge amount of which died at the hands of the Germans. I wholly support the German decision, but I wonder, would we wear a German symbol that commemorates fallen German soldiers? ‘Bloody good on you, Germany’, I felt but didn’t say, that irritating lump having lodged itself too profusely in my throat.

On the other hand though, I felt furious. Just how much further do Germans have to go in acknowledging the wars? Now they even have to mourn our dead, while their dead soldiers barely get a nod! They, as the losing nation, didn’t, and still hardly, honour their soldiers, even though they lost 4-5 million in WWII alone, compared to the 1.7 million that the British (and Commonwealth) lost in both world wars combined. Of course it’s not about numbers, but that’s a lot of bereaved German families who have none of the comfort that their men will be remembered. For decades there were no memorials to German soldiers at all. They were all looked on with shame and silence. And yet many of them would have been no different to ours: men fighting for their nation. Very few people in this country have thought about what it is like for the losing side, for which stirring patriotism and national pride are anathema. I know that because I talk to audiences, of all ages, all over the country about this, and the overwhelming reaction is: “Gosh, I had no idea. That’s so sad / moving / wrong…” 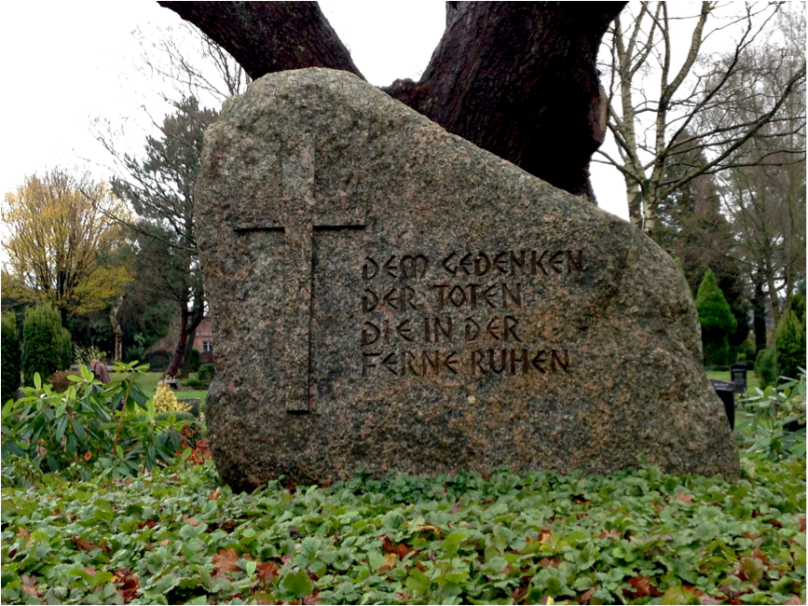 ‘In memory of the dead…’ A WWII memorial in Itzehoe, Germany

You can see I get disproportionally emotional at this time of year! My Anglo-German roots wrestle and strangle each other in my chest as I try to work out what Remembrance should, or could, be about, and to what end. It is wholly right to remember all those we do, but has our little red poppy symbol become so distractingly potent, that it can knock, or raise, public figures off and onto their perches, simply through its absence or presence? Surely that kind of “poppy fascism” (to use Jon Snow’s controversial words) isn’t the right way forward? To me, the difference of sentiments expressed in the words of the English and German football representatives respectively, sum up both what is good, and what is missing, in our culture of Remembrance.

Martin Glenn, the FA (Football Association) chief executive, said: “Remembering and commemorating the men and women who have served this country is ingrained in our nation. Many have made the ultimate sacrifice and we will be honouring them, both on and off the pitch, for our match against Germany. I would like to thank the German Football Association for also agreeing to wear the poppy for the match, in a show of solidarity and unity at this important time.”

Reinhard Grindel, the DFB (Deutscher Fussball Bund) president, said: “I positively welcome the decision to allow both the English and the German national teams to wear poppy armbands, because these are not about political propaganda in any way. They’re about remembering the kind of values that were kicked to the ground in two world wars, but are cherished by football: respect, tolerance, and humanity.”

Käthe Kolwitz: ‘To the victims of War and Dictatorship’, Berlin

The main distinction between the World War ‘winners’ and the ‘losers’ in their approach to Remembrance, is that the winners look back, to all that was. And the losers look forward, to what we should strive for. I think we need both. German WWII remembrance culture is a 365 days a year affair. Their memorials are visible and active reminders of the futility of war, loss, destruction, and discrimination, and they serve to help people learn from the past. Maybe, within the extraordinarily beautiful choreography and largely heart-expanding music (I’d personally prefer a little less of the Spielberg-esque sentimentality) of our Festivals of Remembrance, we too could include more of the gritty reality of war that Harry Patch, the last WWI veteran, knew all too well: “It was not worth it. It was not worth one, let alone all the millions.”