As I started writing this month’s blog this morning, the Queen was visiting Bergen-Belsen Concentration Camp for the first time, apparently at her request.

Much has been criticised or mocked about her State visit in the press: the timing – the eve of a summit where David Cameron is expected to begin new negotiations in relation to Britain’s EU membership; her apparently politically-biased speech in which she referred to a division in Europe being “dangerous” and that guarding against it “remains a common endeavour”; the Queen’s unenthusiastic reception of the German president’s gift of a portrait of her as a child on a blue horse with her father; even the reason for her going was apparently to put Angela Merkel, who is often referred to as Queen of Europe, back in her place…!

The cynics and critics are in their element and yet, regardless of all that, it seems to me that for an 89 year old lady who has been, and is, so closely linked by blood and history to Germany, the gesture of total reconciliation on an official level is of more importance and relevance than any of the other more petty stuff. 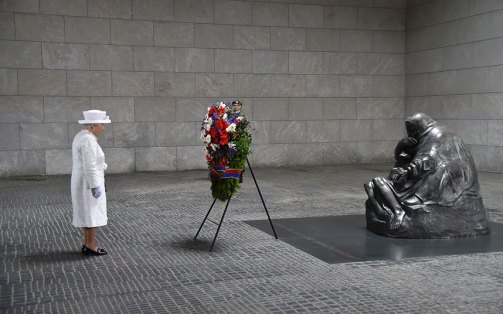 I think it is hard for the generations that didn’t experience WW2 in the direct way these octogenarians did, to fully grasp the lasting impact of war. Many wrap their memories in silence and take them to the grave. But often you hear about people who begin to talk about their experiences in old age, or as they approach their death. It’s as if they want to resolve or put to rest what they haven’t up until that point been able to do. Only last night I was speaking with a woman who told me that her father’s last wish before he died had been to return to the place he was held as a POW in Germany in WW2. What a strange choice of place to go… or is it?

Today, on request of the Queen, Bernard Levy, an 89-year-old soldier who was 19 at the time Bergen-Belsen was liberated by the British in 1945, attended the wreath-laying ceremony at the camp. He said: “For 68 years I’d shut the whole subject out of my mind. But we’ve got to make sure that this particular horror stays in people’s minds… It is fitting the Queen should go. Holocaust education is so paramount, and many kids of today don’t really know about it. The Queen going there lends credence.”

The Chief Rabbi agreed: “The memory of the Holocaust remains such a fundamental aspect of modern Jewish identity that the Queen’s journey to memorialise the victims will be viewed as tremendously significant by Jewish communities across the world.”

And for many Germans, simply the fact that one of the last state visits the Queen will ever make was to Germany will be experienced with a great sense of honour.

So regardless of any implied political undertones of the rest of the visit, today’s visit to Bergen-Belsen will have made a huge difference to many people. “It’s difficult to imagine” is what the Queen said on leaving the camp and I suspect she will have gone on trying to imagine as she left the country. The experience of visiting a concentration camp site doesn’t leave you easily. So my only criticism of the Queen’s State visit would be that it ended on such a sombre note. Her last experience of Germany will reference that darkest of episodes in history from which we are all trying to move forward. But maybe I am wrong there. Maybe it was perfectly planned for the “complete reconciliation” the Queen was said to be wanting to achieve.

2 thoughts on “The Queen’s visit to Germany – “politically motivated” or her gesture of “complete reconciliation”?”