Within the context of my interest in WW2 Remembrance, May offers a welcome break from the misery and darkness. It is indeed a time to celebrate, for on May 8th 1945 Churchill was finally able to announce that the war was over in Europe. The jubilation was naturally boundless and Britain threw the biggest street party the country had ever seen. The Allies had triumphed over the Nazi enemy, Germany had unconditionally surrendered, and it would be the end of death and destruction. 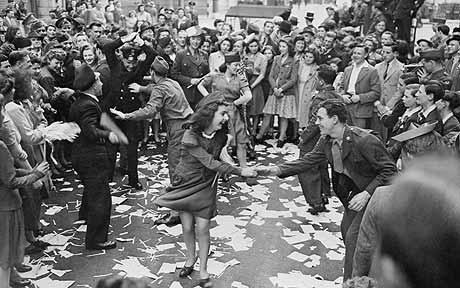 May 8th 2015 was the 70th Anniversary of VE Day, Victory in Europe Day. It too offered an opportunity both to celebrate as well as to honour and thank those alive, and dead, who helped bring about the victory. The BBC is broadcasting a whole range of programmes and coverage in this vein, but so far there has been one that has stood out for being a break in what at times comes across as a fairly one-sided or incomplete narrative. In The Rape of Berlin broadcast on the BBC World Service, http://bbc.in/1GBlBDs Lucy Ash looks at the subject that even Germans today have difficulty in re-visiting. It looks beyond the simplified duality of the triumph of the victors versus the evil of the losers, to the very dark underbelly of war and its largely unacknowledged victims. I am talking here about the fate of millions of German women and children who fell victim to the biggest mass rape in history.

For German civilians 8th May was, of course, no relief; no assurance that their misery would end. They would continue to be at the mercy of the ever-advancing and avenging Soviet army that had been sweeping westwards since 1944, and were considered free game for many an allied soldier who wanted to exact revenge for Hitler’s war of annihilation. As a result women and children from 8 – 80 years old were brutally raped, often multiple times and over long periods, many killed in the process or dying from their injuries. The violence against German women was, however, seen by many to be justifiable. The Soviets had propaganda posters positively encouraging it. “Soldier, you are now on German soil, the hour of revenge has struck!” UK and US soldiers, possibly others too, were also guilty of that war crime. For G.I.s rape would normally result in execution but no G.I. was executed for the rape of a German citizen.

Wartime sexual violence against women and girls is a widespread and age-old weapon of conflicts all around the world. We just have to look at what is happening – everywhere it seems – today. But rape is rarely mentioned as an inevitable by-product to warring nations, despite history showing us time and again how it goes hand in hand with the more familiar images of warfare – munitions, rubble and death. I find it problematic, as anyone reading my other blogs will already know, that in our Remembrance ceremonies our attention is almost exclusively focused on the heroics and bravery of war, the soldiers who fought or fight for us, the victories. Of course this is a vital element, but it so easily sanitizes what is usually insane, turning it into an honourable, admirable thing even, yet overlooking the unbearable suffering of civilians, none of whom get medals or recognition for their bravery.

Social acknowledgment of rape is possibly one of the ways towards healing for the victims. And in my trilogy of talks The other side I am trying to present a fuller picture of WW2 by including the experiences of German women and children. The overwhelming response of my audiences has been an initial stunned silence followed by a quiet “I had no idea”.

I really feel it is time we did have an idea.

Finally, I am looking forward to watching Savage Peace on BBC2 tonight at 10pm as it is all about this.