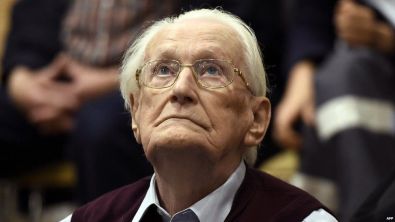 This is an obvious choice of topic for my July blog for it touches on all my main themes: WW2 Germany, prison, punishment, forgiveness, redemption.

What we have here is a 94-year-old former SS officer whose job at the age of 21 was to sort the luggage of the new arrivals to Auschwitz and register the prisoners’ goods and valuables. Oskar Gröning was not a guard but a bookkeeper who counted the money the Nazis stole from the Jews. During the trial that started in May in the German city of Lüneburg he admitted: “It is without question that I am morally complicit in the murder of millions of Jews through my activities at Auschwitz. Before the victims, I also admit to this moral guilt here, with regret and humility. But as to the question whether I am criminally culpable, that’s for you to decide.” Today he was sentenced to 4 years in prison after the German Courts found him guilty of being accessory to murder of 300,000 people.

For more than a decade Gröning has been giving interviews with a candidness that is very rare among other surviving SS men and women. He fully admits to what he did and saw, knowing all too well that his honesty would help get him convicted and most likely sentenced to spend his last days in jail. He is clear that he wants his testimony to be used against those who deny the Holocaust – “I would like you to believe that these atrocities took place, because I was there”. He also gives valuable insights into his now-inexplicable mind-set and motivations describing how as a young man his enthusiasm for the Nazi cause had quickly turned into euphoria, not least because of Adolf Hitler’s success in dealing with Germany’s horrendously high levels of inflation and unemployment. On being offered to join what he considered to be the “dashing and zestful” SS, he didn’t hesitate to leave the bank where he worked. He explains how German people believed there was a conspiracy amongst the Jewish people against them. They represented an existential threat, as did the forces of the Soviet Union. “Between those two fights, one openly on the front line and the other against the Jews on the home front, we considered there was absolutely no difference, we exterminated nothing but enemies”.

These kind of insights into the workings of the minds of the people who made up the Nazi killing machine is invaluable even if it doesn’t excuse in any way at all what Gröning did. Reading my grandfather’s letters from the Eastern Front I was similarly struck by the genuine sense of threat the Bolsheviks posed to the Germany of the 1930’s and 40’s. So big it justified the invasion of Russia. As island people it is harder for us in the UK to understand the territorial vulnerability of having nine different – potentially hostile – countries nestling up to ones borders. I am not excusing, just trying to comprehend, as always, the motivations and intentions behind the deeds. The first prisoner I ever worked with, a bank robber in Long Bay Jail, Sydney taught me the most valuable lesson I learnt for working with criminals. “Angela, in the 12 years I have been in prison I have never met a single person who committed their crime out of evil intent…” I’m going to leave you with that thought for now as it took me many years of challenging it before I could agree with it. Back to Gröning.

Everyone involved in Nazi war crimes obviously has to take responsibility for what happened. But is a 4-year sentence in prison the right way for this 94-year-old? Is 4 years justice for the crime of being “an accessory to the murder of 300,00 people”? “It’s a ridiculous proportion” according to Michael Wolffsohn, author of Eternal Guilt?. Surely we need different measures for such cases? Prisons are designed to act as centers of deterrence, rehabilitation (in theory at least) and punishment. Deterrence? This man is not going to re-offend! Rehabilitation? This man is already re-habilitated. Punishment? Yes, his actions seventy years ago more than deserve it. But as Eva Mozes Kor, the 81 year old Holocaust survivor, asks: “What is the purpose for what we are doing?… Putting them in jail does not do anything to help the victims feel better or heal their pain… I would like someone to demonstrate to me how exactly that helps me or other survivors. I didn’t say they should get away with it, but the attention is given to the perpetrators and not the survivors, and that to me is what is wrong.”

Well I’m with her totally. Even by trying to do what they think is expected of them, the German Judiciary is going down the same, strangely illogical path I feel our Criminal Justice System does time and again. We love punishment but Gröning has admitted his guilt, apologized for his wrong doing, he has asked for forgiveness and he has been putting atonement and restitution into practice by speaking out to students in person, or by Skype even, about what happened. All the desired outcomes of punishment have already been achieved! So as with Restorative Justice, why not come up with something that will restore rather than punish? As Eva suggests, “give him 4 years, if he lives that long, to lecture as a community service… Every time he lectures to a group of students, he will testify about it and will relive those experiences. I don’t think it is an easy thing for him to deal with. In jail he doesn’t have to talk about it – he can just rot away. But I am really interested in him telling young Germans, ‘It happened. I was there. There was nothing good about the Nazi regime. It brought tragedy to millions of innocent human beings, to the Germans, and even to the perpetrators.’ That is the lesson – we have to prevent it from happening again. That would benefit Germany and the rest of the world.”

So I wonder, is this really Justice? Or is Gröning paying the price for the German Judiciary’s failure to bring about real justice at the time it was really due?