Behind every terrorist act is a human being with a grievance. Some will probably call me a ‘terrorist sympathiser’ for saying that, but one of the most important lessons I learnt from working and talking with countless criminals is that people themselves are not innately evil. Their deeds might be, but they themselves are not. That’s why many of the over-simplified, dualistic discourses in the recent ‘To bomb or not to bomb in Syria?’ debate really got under my skin. Action vs. Non-Action, Good vs. Evil, Right vs. Wrong…

I have no first-hand experience of today’s terrorists (thank goodness) but in the nineties I did work closely with a Lebanese man awaiting trial for his major role in one of Germany’s biggest terrorist attacks in which five Kurdish politicians were blown up in a restaurant in Berlin in 1992. As a terrorist he was considered a potential danger and security hazard and kept in enforced isolation. So for him my art class became his only excursion from his cell. Why the authorities found it fitting to place him in my care when I myself was locked in the room with no beeper, no key, no guard, still puzzles me! He asked the group to call him Habibi, so obligingly we did. It was only many years later that I discovered that was the word for “my darling”.

Back then you would have never associated Habibi (I will stick with that name for potential legal reasons) as looking like a typical terrorist. Today his big dark beard would possibly arouse an involuntary prejudice against a stereotype, but other than that he had smiling eyes, a polite and gentle demeanor and wore shorts and sandals. In an introductory exercise to my mural workshop I got the men to plant a painted seed into a painted earth and let it grow up into the (painted) sunlight. Habibi’s seed blossomed into a beautiful, expansive, healthy looking shrub with red flowers.

He subsequently translated it onto the wall and then, with a newly found artistic confidence he painted another tree, and added birds. But these birds looked war torn with tatty feathers as if they were fleeing exploding bombs – the bombs that were tearing his country apart, or the bomb that he himself had helped plant? One bird painted with special care was sitting on a nest of five eggs. I couldn’t help but make a link to the five for whose deaths he was in part responsible.

One day Habibi entered the classroom looking like a freshly shorn sheep. He was trembling, in shock and somehow horrifyingly naked. I encouraged him to tell me, and subsequently draw, how he had come to lose the big dark beard that was both his religious and personal identity. This proved to be the trigger for a huge release of pent-up rage first against the prison guards, thirteen of whom had frog marched him out of his cell, chained him to a bed and, pinning him down, shaved off his beard. His rant didn’t stop there however. He raged on about the war in his country and how “they” were killing “his” children. He clearly felt his bombing activity to be justified. It was self-defense derived from a sense of total injustice and helplessness, a state in which he and his people were the victims not the perpetrators. 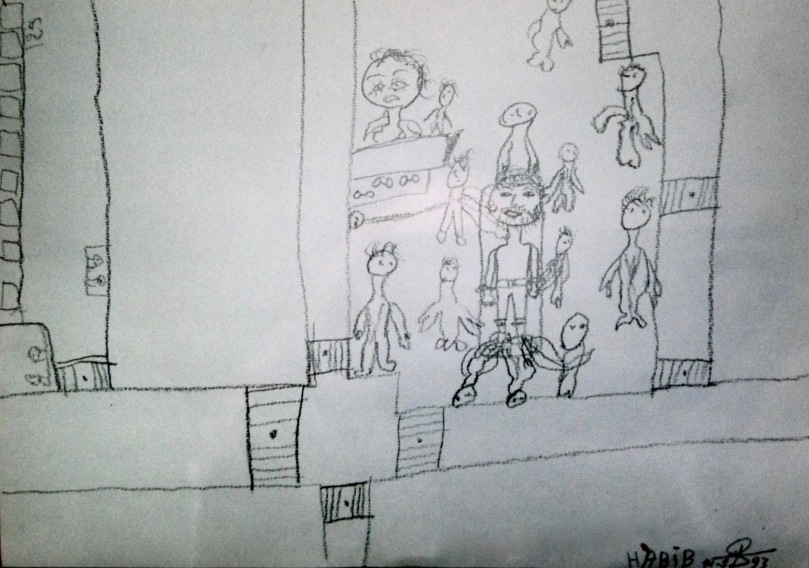 Does this ring any bells? Is this not part of what is happening today – for both sides? Reacting to violence with violence perpetrates… well, more violence. And more innocent victims whose deaths need to be avenged. Of course it does, and as this progresses each side feels ever more justified in their violence. So when “taking action”, in itself a potentially positive thing, becomes synonymous with bombing and every other attempt to solve the problem is seen as taking no action, don’t our leaders too become advocators of the very eye-for-an-eye Old Testament mentality that we are trying to combat?

Armed with more national self-reflection, basic human psychology and a genuine will for peace, our leaders could become real leaders in their quest to find solutions for some of the worlds’ massive and complex problems. But for them to be that they need to act completely differently to the real terrorists.