It’s 11am on 11.11.14 and that makes it time to write down my thoughts and reflections on what has been going on recently in terms of Remembrance.

Watching the Albert Hall Festival of Remembrance on Saturday night, I was struck once again by how well we British do pomp, symbolism and ceremony. It was truly powerful and with its combination of stirring music, potent narrative, and visual spectacle it has become an art form. Developed and refined over decades, it is designed to move you. And these days, I am quite sure, to make you cry.

Which is why I came away once again feeling slightly irritated by it. Irritated by the format that we are used to seeing  in the films of Spielberg and other directors of sentimental, patriotic films, designed to manipulate your heart strings and tear ducts  Nothing necessarily wrong with that, except that we seem to be living in a era where showing emotions, and watching other people showing their emotions in order to make us show our emotions, is not only de rigueur but essential to good viewing.

It’s actually quite a feat to succeed at making such grandiosity sentimental. I don’t want to knock it as the sentiments definitely have their place. And there were many, many genuinely moving bits. Personally the inclusion of the young German boy praying in German for reconciliation and peace was the brave, albeit blink-and-you-miss-it, touch that I so long to see more of.

But once again I have to ask, what are we being asked to do? On the one hand we are remembering (though most generations now can’t “remember” they can only imagine) and honouring those who died; those who gave their lives “in the ultimate sacrifice”. And of course that is crucial, “lest we forget”. But, in order for those men and women not to have died in vain, isn’t it of equal importance that we remember, with as visceral an experience, the true horrors of war? I’m not suggesting that there should have been dismembered limbs and shrapnel raining down on the audience instead of poppy petals, but by beautifying the ceremony to the extent it was, are we not being lulled into continuing the belief that war is all about honour, patriotism and other such lofty values?

I am wondering if some of the language we use hasn’t become outmoded to the point of being sloppy, ambiguous and actually not true. Doesn’t “The Great War” for example still smack a little of triumphalism? And if World War I really had been “the war to end all wars” there wouldn’t have been a Second World War, nor would our politicians be quite so gung-ho about entering into current war situations.

And talking of politicians, there was one bit of BBC commentary (and I usually love the BBC) where the commentator revealed that: “David Cameron was close to tears and bit his lip”. For goodness sake, that sounds like something out of Fifty Shades of Grey. I mean really, of what interest or relevance is that to the event? Why does his political position have anything at all to do with our personal or collective processes of remembering? (Unless it had been a demonstration of remorse and humility by Tony Blair of course.)

OK, I know I am biased. I study, write and lecture about the German process of remembrance and how different it is in form and effect from the British process. Their constant and overt references to their own aggression, destructivity and shame have made them into a nation of active pacifists. I accept that one could dismiss this difference as being purely due to them being the ‘losers’ and us the ‘winners’. But I don’t believe that is the point. Can we really talk about winners and losers in relation to WWI when more than 16 million are dead? Does the presence of poppies everywhere (oh no, I have stumbled into the contentious domain of poppies) really do the job well enough? Poppies were and are a great national symbol, but they seem to have gained such momentum and significance that they actually might be preventing us subsequent generations not only from grasping the horrors of all warfare but also from acting in ways that will ensure that it really doesn’t happen again. It is all too easy to substitute deep and effective contemplation with a poppy. 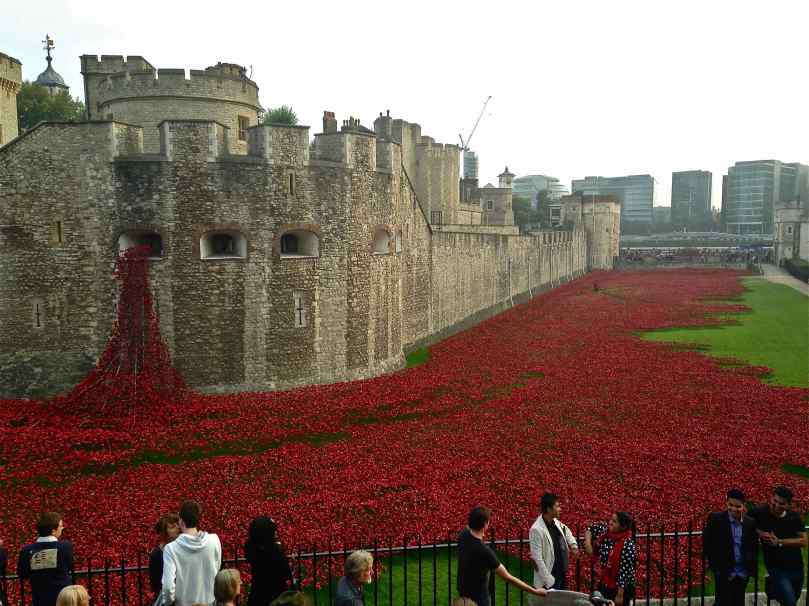 That said, like most people I too love the ceramic poppy field at the Tower of London, an immersive and beautiful spectacle. But its disappearance is critical to the concept and its success as a memorial. The fact that Boris Johnson and The Evening Standard successfully campaigned to have its presence extended and preserved is missing the point and robbing it – and the people – of its potency. Those 888, 246 service men who died didn’t have that chance to extend their lives for even a second. Missing the poppies, losing the poppies, confirming the poppies to memory, those are the kinds of experiences that will teach us to love and treasure what we have, to act on opportunities while they are there and to preserve the memories in our own hearts “Lest we forget”.

One thought on “Remembrance Sunday: “David Cameron was close to tears and bit his lip…” For goodness sake, that sounds like something out of Fifty Shades of Grey.”