Germany’s shock World Cup exit yesterday – the first time the German team has been knocked out in the group stage since 1938 – naturally started a tsunami of Twitter wisecracks and news headlines.

“Germany’s World Cup 2018 downfall made everyone else pretty happy…” said one.

Oh dear, I thought, here we go. Germany’s homegrown term ‘Schadenfreude’ was coming back to bite them with a vengeance as people free flowed expressions of their ‘pleasure in another’s misfortune’.

“Just re-watched Germany getting knocked out of the world cup. There are very few greater pleasures! ‪#GermanyOut”

Of course the age-old war references were also wheeled out:

It seems they never learn from their past”

(Actually they probably have learnt more from their past than anybody else in the world, but anyway)

Even the Telegraph headlined with the old fav: 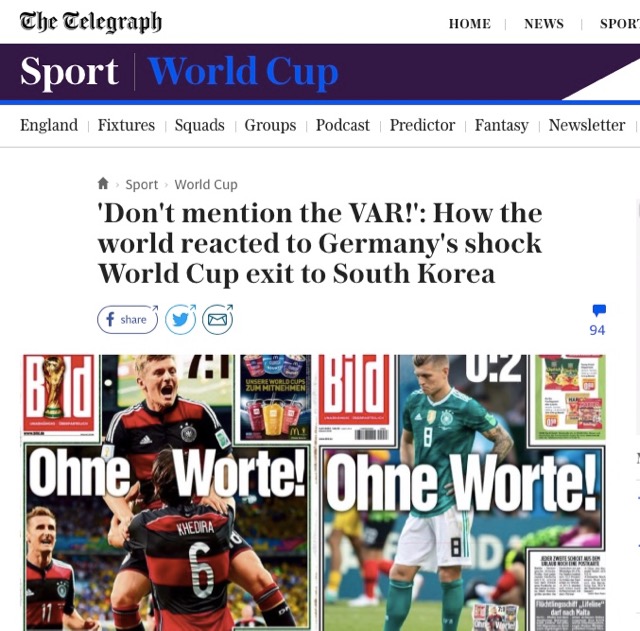 Germany, meanwhile instantly, and in many cases tearfully, agreed it deserved to lose:

“That was just shit – and totally deserved too,” admitted one fan. “A lethargic and sad appearance,” said another.

And they were right. South Korea deserved to win. The reigning champions had lacked the obvious passion of other teams. Their tactics were old and mechanical, completely outdated in the face of the raw hunger to win displayed by so many other nations. And their long downfall from the position of winners naturally creates welcome hope and space for others. Maybe they had become too complacent and their emotional defeat will finally soften, even humanise, their robotic reputation.

While all this was going on, I was at Chalke Valley History Festival near Salisbury listening to two historians, whose books on the Second World War and Germany I had recently read. Keith Lowe’s The Fear and the Freedom gives a brilliant insight into the aftermath of the world conflict that touched every sphere of life in some way and created so much of the world that we know today. James Hawes’s The shortest history of Germany rattles through the centuries of upheaval at breakneck speed exposing Germany’s volatile past, fluid borders and a great deal more.

The contrasting attitudes to the Germans presented by these two occasions couldn’t have been starker. I realise now that my disinterest in competitive sport and my interest in history stem from the same fundamental dislike… of the winner / loser mentality. Both war and more recently sport are wholly about winning, the latter often at the cost of sportsmanship. Gloating is something we British love to do. We hold tightly to the glories of our past so we can readily produce them at any opportune moment, often as grudges or gripes. As one disappointed German said to an English gloater last night:

“We used to admire your sporting fair play in Germany. You are shamefully disregarding this. Maybe it sounds old-fashioned and conservative, but maybe you should think about it when you get back to your keyboard. Sometimes it’s good to play fair play in life. Best wishes and I keep fingers crossed for the English team.”

After the lecture about German history, a question arose about Germany today. It carried a whiff of the old British triumphalism, the kind that dozes just below the surface. (I appreciate you might have to have German blood to fully notice how often it is stirred.) James Hawes responded by saying he had no time whatsoever for the “spitfire” mentality. To my, and actually his, surprise, half the audience broke into spontaneous applause. I felt proud of my fellow, very English audience.

In sport, the black and white division into winners and losers changes over the course of each tournament, but always leaves the world divided. Into those that are happy and those who are devastated. The ‘other side’ is always the foe, to be ruthlessly beaten. As in war.

In the study of history, the past changes face. As you deepen your relationship with nations, events and wars, you gain understanding. The popular myths shift until a more rounded picture emerges. The winner / loser mentality is replaced by nuance, empathy even. As Keith Lowe suggested as a way forward for us all, the separate victim, hero and villain archetypes into which individuals and whole nations fall, merge to become just human beings being human in all its forms.

Germany’s fall from 2014 winners and oft-times finalists or semi-finalists, may be making many people happy. Personally, I derive more happiness from the levelling approach of history than the peaks and troughs of win-lose competitive sport. So I am with the tweeter who said:

“Sending hugs to German fans in Berlin who are definitely not having a good day”.