Having spent the past two weeks in France enjoying everything that France has to offer and so much of what I love in life, it is hard to write my monthly blog on my slightly sombre themes of memorials, World War II, the Nazis, remembrance and all that stuff. And particularly on an iPhone from a campervan! But today, as we were driving past anyway, I went to a memorial that has to be one of the most memorable in terms of its immediate and tangible connection to Nazi atrocities. 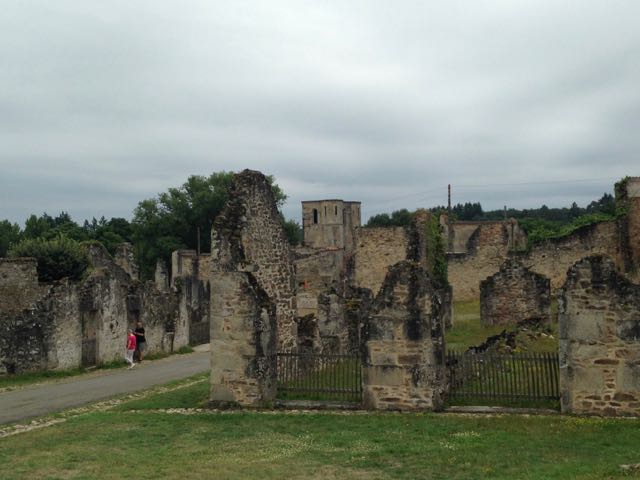 Oradour-sur-Glane was a village that was destroyed by the Nazis on 10th June 1944. Not only was the entire village destroyed, but all 642 of its inhabitants in the most brutal way. Just a matter of days after the D-day landings, the Nazis were clearly panicking and feeling the need to demonstrate that their strength was still intact. A group of SS men, who had fought and been brutalised on the Eastern Front, sought revenge for the disappearance of one of their own by rounding up the entire population of the village, separating the men in barns, shooting them and then burning them. The women and children were locked in the church where they were all burned.

The destroyed village has since been preserved as a testimony, monument and memorial to the wholly unnecessary atrocity committed by the Nazis. Walking around it you see not only the eerie shells of the buildings – homes, shops, cafes, places of trade and the church – but also the remains of the everyday possessions of the villagers: their sewing machines, their bicycles, their cars, their beds, their chairs and tables, their spectacles and their watches stopped at the hour that their owners’ lives stopped.

I had read about this place and, as I always tend to do, I cried. But when I walked around, repeatedly being asked in French to remember, to remember the men, women and children who died that day, I couldn’t really feel anything. Maybe it was the presence of so many other tourists; maybe it was the conscious monumentalisation of the place; maybe so much time has passed that even imagining has become too difficult for people like me who weren’t even alive in those times. Or maybe the joy and sunshine, the rosé and stunning summer scenery, the little French villages, blue shuttered houses and fields full of smiling sunflowers of the last two weeks made me not want to feel the sadness, tragedy and destruction of those times? Maybe I now no longer need to ‘remember’ quite as often as I have in past years. Because through writing my book, much of which touches on this subject and the first draft of which is being read as I write this blog, I am beginning to feel that I personally have remembered enough of the horrors that the Nazis did to others. Maybe I am reaching a time when I will be able to drive past such a place without feeling the pull to stop and ‘remember’.

Or can one never remember enough?