Last month I wrote about how the words “Britain” and “shame” rarely appear in the same sentence. This month the two words have been inseparable. “Britain’s Shame” even became the title for BBC’s Panorama programme on the horrifying and heartbreaking fire at Grenfell Tower on 14th June. The programme opens with the accusation that shoved these two words together to sit unwillingly and uncomfortably side by side for all the world to see: “They were warned several times, countless times; they were warned probably until the day before the fire…” 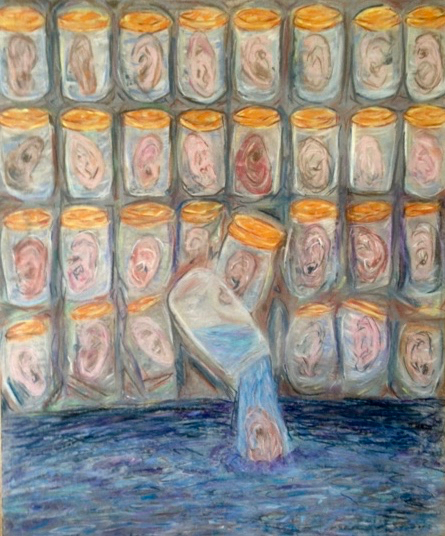 I don’t feel in any position to write about the tragedy that has ended or blighted so many innocent peoples’ lives. It is too sad and it is too soon. But I do feel in a position to talk about the shame that surrounds it, the shame that needs to be looked at and above all felt so that vital changes can be swiftly made before another tinderbox of neglect ignites.

For well over a year, with Brexit and the recent elections, we the British public have been being fed narratives about what will make us “great”. Boil them down and they are usually about economics and what apparently will make life better, above all, for “hard working families”. I don’t agree. No country can be great while a large proportion of its population have to foot the bill for the high standards of a minority. So many people in this country are living in sub-standard, unsafe conditions and struggling to make ends meet in spite of working their bollocks off. Our prisoners are too. And like our fire-hazard clad tower blocks, prisons are also just waiting to combust.

Some of the world’s greatest thinkers knew this. They knew that for a country to be truly great, you have to look at the standards of life of the poorest, the most vulnerable, the weakest and the troubled. And when we do that, Britain falls very short of the greatness to which it so aspires.

Fyodor Dostoevski: “The degree of civilization in a society can be judged by entering its prisons.”

Winston Churchill: “The mood and temper of the public in regard to the treatment of crime and criminals is one of the most unfailing tests of the civilization of any country…”

Nelson Mandela: “No one truly knows a nation until one has been inside its jails.”

For years prison inspectors, charities, prison reform campaigners, enlightened politicians, prisoners and officers alike have been warning the government that the prison system is not fit for purpose. Suicide rates have doubled in four years; assaults and self-harm incidents have reached record levels; overcrowding, understaffing, underfunding make our prisons not only unsafe but also “shameful places” of wasted opportunity and wasted human potential; warehouses of broken and dysfunctional humanity being held often in little more than cages, then ejected back into society only for half or two thirds to return within the year.

Last year’s Queen’s speech announced the long promised Prison and Courts Reform bill as the “biggest prison shake-up since Victorian times”. It had made real progress through parliament, received broad parliamentary support and was welcomed by campaigners – like me – who had been consulted and listened to in ways we hadn’t been before. There was a genuine excitement and will to reform our prisons and this law would have required the government to respond to the consistently bad findings of the Prison Inspectors. But, in another U-turn by the Tory Government, it has been omitted from this year’s Queen’s speech. And so once again the momentum behind vital prison reform gets reduced to a stutter as ministers get re-shuffled and implementations of good ideas get delayed. 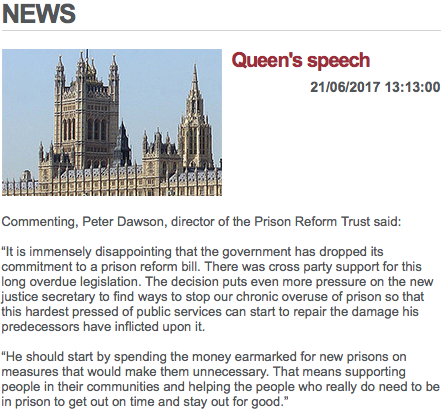 The government and those responsible for the mistakes surrounding Grenfell Tower need to feel the shame of the wholly avoidable tragedy. And we as a nation, need to feel ashamed about our treatment of prisoners. It is all too easy to look at them as second- or third-rate citizens, who have lost their right to fair treatment; who are at the bottom of the pile of people to care about just as some of those in power look on the inhabitants of social housing. Some prisoners, yes, it is harder to care about them. But the vast majority are just people, people who deserve help to make their lives work for themselves and ultimately us. They are just people, 70% of whom have some kind of mental health issues, 52% of whom are dyslexic, 50% of whom can’t write, 25% of whom have spent time in care, others who themselves were victims… Disadvantaged people who didn’t have the advantages that so many of us were fortunate enough to take for granted.

Let us feel ashamed for a moment, because shame can lead to genuine humility and lasting change, above all in attitude. Germany’s emergence out of the biggest and darkest pool of shame in recent history is a good example of how facing ones shame can lead to better policies. If any good at all can come out of the devastating tragedy of Grenfell Tower, may it be that those responsible listen to the warnings and pleas for help or change coming from all those affected by, or connected to, the various areas of British society that are not “great”. For to ignore them further would now not just be negligent but criminal.